In Genesis 3:1, the serpent said, “Did God actually say, ‘You shall not eat of any tree in the garden’?”

In the whole history of recorded thought the small phrase uttered by the serpent “did God actually say” is surely the most consequential. Hidden within this seemingly innocent question was a Pandora’s box full of blasphemous errors and destructive evil. “Did God actually say” conveys a host of assumptions motivated by envy, mutiny, and cynicism. The audacity and arrogance implicit in this question are difficult to imagine.

With this inquiry the snake got his proverbial “foot in the door” within Adam and Eve’s mind and heart. He inserted just enough doubt and confusion to suggest the idea that God could and should be questioned. The serpent insinuated that the creator’s perspective 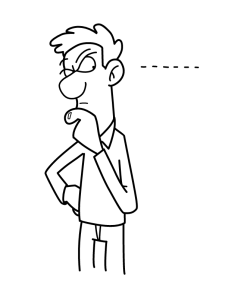 was skewed and in dire need of correction. Subtly, he positioned Adam and Eve to judge between himself and Yahweh Elōhîm. He asked them to heed his words instead of God’s.

The snake’s declaration: “You will not surely die” was also a blatant contradiction of God’s words in 2:17. In effect, he accused God of lying. Yahweh Elōhîm was holding back on them, the serpent argued, and withholding his greatest blessing, specifically a kind of knowing that would make them “like God.”

In addition, by utilizing the language from Gen 1:26-28 of image and likeness (“like God”) the snake urged them to re-imagine themselves apart from their creator. The serpent redefined them within his worldview by stripping the concept of the divine image from its setting in Eden. He inspired them to align themselves as the imago Satanas (image of Satan), rather than the imago Dei (image of God).

How true, then, is Paul’s depiction of mankind’s mental state: “The god of this world has blinded the minds of the unbelievers, to keep them from seeing the light of the gospel of the glory of Christ, who is the image of God” (2 Cor 4:4).

Buy My Book: Such a Mind as This: A Biblical-Theological Study of Thinking in the Old Testament

"This is a very deep book. It is written at college level and is a bit of a challenge to read for the layperson. Nevertheless, I would recommend that all Christians who want to deepen their understanding and relationship with God make the effort to read this book! it is well worth it."

"In the words of the kid on the tricycle at the end of The Incredibles, "That was totally wicked!" Seriously, what a jaw-dropping read. So, so, so good. Every chapter was my favorite until I read the next one. Anyway, wow! The book of Job finally makes sense. And Deuteronomy has always been my favorite OT book; now I know why."

"This book is rich in Old Testament knowledge about the mind. I pray that His people will apply it."

"This is NOT entertainment! It contains no junk food for the soul. This book will challenge you to pay attention to your daily thinking because all sin begins by first engaging in wrong thinking."

"Every pastor, Bible teacher or student of the Word should have this book on their shelf."

“I really enjoyed Such a Mind as This. I am a theological layperson. I don't read a ton of theology (but certainly some). Your book just adds such a fresh perspective. It opened my eyes to a lot of things I had just never really thought of or grasped before.”

"I especially liked Chapter 2 so far and the point you make about the world being subject to analysis and development, and how it’s also stunningly beautiful AND complex, which allows us as humans to use our minds. I am enjoying it a lot and impressed with the quality."

“The book is for the theologically, intellectually minded, not for the typical layperson (but that's the problem isn't it, that most lay people have not been trained to ‘use their minds’!).”

Welcome! This site supports my book, Such a Mind as This: A Biblical-Theological Study of Thinking in the Old Testament.

You ought to read these books

Fit Bodies Fat Minds: Why Evangelicals Don't Think and What To Do About It

Think: The Life of the Mind and the Love of God

The Old Testament Is Dying: A Diagnosis and Recommended Treatment

The Drama of Scripture: Finding Our Place in the Biblical Story

A New Heaven and a New Earth: Reclaiming Biblical Eschatology

Not the Way It's Supposed to Be: A Breviary of Sin

Ancient Near Eastern Thought and the Old Testament: Introducing the Conceptual World of the Hebrew Bible

The Liberating Image: The Imago Dei in Genesis 1

The Lost World of Genesis 1: Ancient Cosmology and the Origins Debate

The Fear of the Lord Is the Beginning of Wisdom: A Theological Introduction to Wisdom in Israel

"Here Are Your Gods": Faithful Discipleship in Idolatrous Times

We Become What We Worship: A Biblical Theology of Idolatry

How to Think: A Survival Guide for a World at Odds

The Last Christian on Earth: Uncover the Enemy's Plot to Undermine the Church

You Are Not Your Own: Belonging to God in an Inhuman World

Christianity at the Crossroads: How the Second Century Shaped the Future of the Church